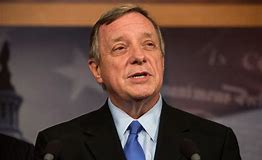 At a recent December meeting in Sen. Dick Durbin's Springfield office, Durbin's state director, Bill Houlihan, told members of Bend the Arc:CU that with proper scheduling, Durbin might be available to speak at an upcoming forum being planned by Bend the Arc:CU on white nationalism.

“This is not just a Jewish issue. It affects Muslims, and Christians, queer, gay and straight people, brown, black and white people. We are stronger together. We hope that Sen. Durbin will provide us with answers to the question, “What impact can the government have on those who seek to do us harm?”

During the 2018 election, Bend the Arc:CU was very active in trying to defeat IL-13 Congressman Rodney Davis by canvassing multiple times in a Campustown precinct to register voters (our precinct had the highest turnout in the city of Champaign). Davis' opponent, Betsy Dirksen Londrigan, who has worked for Durbin's campaigns in the past, lost by less than 2%.

Bend the Arc:CU is not alone in hoping Londrigan will run again. Houlihan confirmed that Durbin's office has talked to her about running again, but he cautioned that statistics show that a second-time candidate has only a 15% chance of winning on the second go-around. We let him know that Bend the Arc:CU is committed to continuing the fight to unseat Rodney Davis.

As for Davis, whom Houlihan has known for many years, he was unequivocal in saying that despite Davis' very narrow victory, there was little chance that Davis would moderate his very pro-Trump record.

Durbin was the creator of 2001's original DREAM Act (https://www.usatoday.com/story/news/politics/2018/01/25/sen-dick-durbin-and-dreamers/1064615001/), and Bend the AR:CU has actively tried to help young, undocumented immigrants at the U of I and the community at large, so we asked whether there is a better chance for this legislation now that Democrats control the House. Houlihan was certain the bill would pass in the House this year (it was defeated last year) but would be vetoed by Trump if it ever passes in the Senate.