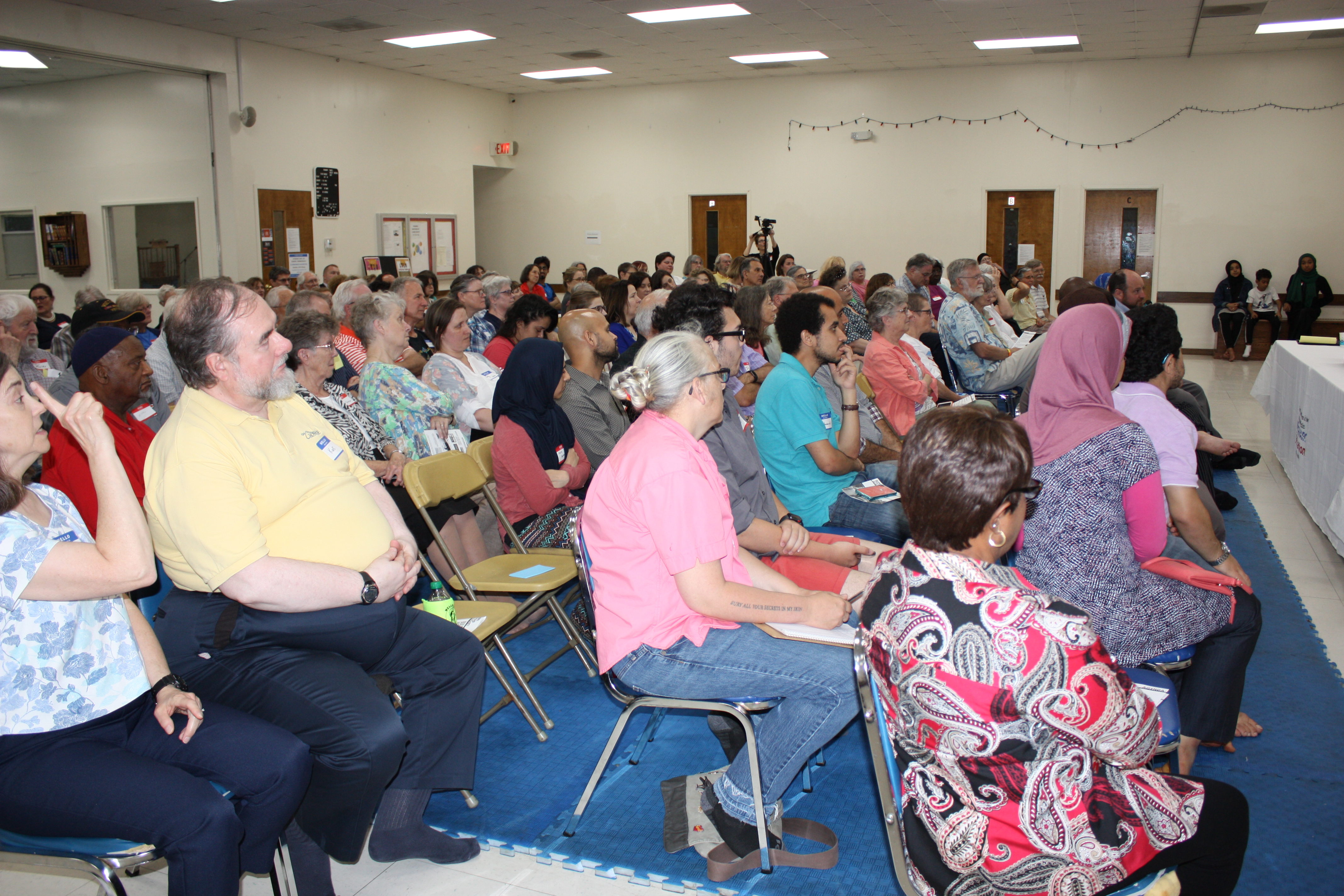 Hate and Stereotyping in Champaign-Urbana

It was the first time that representatives from the Jewish, Muslim, Latinx, and African-American communities had ever met together to talk publicly about their experiences with hate and stereotyping.

The goal, says Bend the Arc:CU Chair Diane Ore, was to learn how targeted communities in the area are dealing with today's rise in violence due to intolerance and stereotyping, and then to brainstorm ways to change this dynamic.

“This is one of those topics that people want to stay as far away from as possible for obvious reasons,” said Ammons. “White supremacy is a disease, it has been a disease from the very beginning of our country, and it remains a disease to this day. The African-American community knows very well what it looks like to experience the hatred of white nationalists, who deny the inherent humanity of African-Americans as a whole...That's why we need to work against it in coalition, as Bend the Arc is doing, with everybody at the table, to work in solidarity.”

Added Lubeck, “White nationalism is an organized social movement that wants to create a white ethno-state. It is implicitly violent because the only way their plan can be achieved is through expulsion or murder.”

Lubeck went on to explain that white nationalism was the surprising result of the success of the 1960s civil rights movement.

“White supremacists were at a loss to understand how the civil rights movement could have been so successful because it went against their ideology of the inferiority of black people,” she said. “They were kind of gobsmacked about how this could have happened. That's when the white nationalist movement started forming. It wasn't just the idea of white supremacy—they wanted to maintain what they considered to be white superiority and white access to economic gains, powers, and privileges.”

Maldonado and Husain described their own personal encounters with the kinds of white supremacist behavior that happens in even the most mundane situations. For Maldonado, a Mexican-born US citizen, routine trips to the store have often resulted in strangers confronting her and her son to complain angrily that they are speaking Spanish rather than English. Worse for Maldonado, a recent bike ride turned frightening when a motorcyclist pulled up alongside her to spew hate speech in her face.

For Husain, who was born and raised in Southern California, it meant normal routines of life, such as visiting a post office, would turn into encounters with police insulting his religion or someone insinuating that he was some kind of terrorist. “I was just 11 the first time I remember it happening. I didn't know what to make of it,” he said.

For Ore and Lubeck, it's the feeling that it's not safe to be a Jew in America anymore. “For the first time in my life, I feel like we have targets on our backs,” Ore told the forum, “and if I feel this way, just imagine how other targeted communities feel. White nationalists are incited to violence by evil rhetoric, and it affects us all. I'm here to tell you it could happen right here in Champaign-Urbana, and none of us want to be added to that list of memorialized cities—Charleston, Pittsburgh, Christchurch NZ, and Poway.”

In keeping with the forum's goal of creating a coalition of communities to fight back against hate and intolerance, Bend the Arc:CU announced a workshop on August 15 from 7-9 p.m. on how to stop the indoctrination of schoolchildren by white nationalist groups. Featured speaker will be Chicago teacher Nora Flanagan, creator of “Confronting White Nationalism in Schools: A Toolkit.” Flanagan's toolkit is currently being distributed by the Southern Poverty Law Center to all 50 states.

Forum-goers were also told about other events still in the planning stages, including bystander training and creation of witness-and-safety teams for use after a hate action has occurred.

“Our goal is to build a new coalition of Jewish people, Muslim people, African-American people, Latinx people, and people from communities who did not have speakers at the forum, including the LGBTQ and Native American communities ” says Ore. “We want to have a steering committee with representatives of all these groups to help all of us understand how our neighbors feel and how to move forward together.”

A video of the entire forum is available at https://www.youtube.com/watch?v=kEOqpQceTLs&feature=youtu.be .